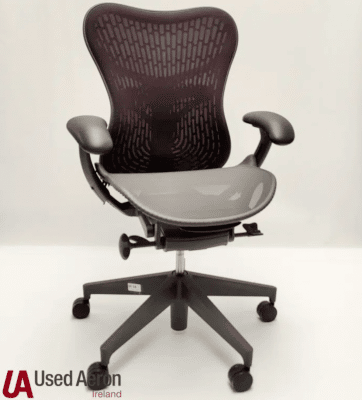 You may have heard of the Herman Miller Mirra 2 the second version of the original Mirra chair. The first Mirra has become a familiar feature in many offices over the past ten years.

However, with changes in technology and the way in which people work this called for a need to update the Mirra chair. The Mirra 2 was born and it came fully equipped with the most up to date technology and is extremely suitable for the office of today.

Herman Miller joined forces with Studio 7.5 of Berlin, Germany and looked to change the Mirra. Starting from the top of the chair and working their way down the chair was changed in almost all aspects. They worked with critical eyes and rebuilt the chair to allow it to take its place again in the family of Herman Miller chairs.

” You need tools that are as agile as your work style. A chair, actually, should act like your own shadow. It should be there, it should be supporting you but it should not bother you”.

The Mirra 2 certainly accomplishes this brief.

The Mirra 2 sports a lot of new features that include:

Dynamic Support: This was completely reinvented. The harmonic tilt provides balanced support when you switch positions. It allows your body to move freely and naturally. Mirra 2’s Loop Spine provides torsional flex, allows you to stretch and reach laterally, while the Harmonic 2 tilt provides a smooth, balanced feel as you recline.

Superior Alignment: The Butterfly Back on the Mirra 2, a hybrid design of polymer veins and merged fabric layers, means intuitive ergonomic response for a healthier workday.

Lightweight Construction:  Herman Miller has a commitment to environmental responsibility, the Mirra 2 is 22 percent lighter than the original Mirra and is 25 percent smaller.

Undoubtedly the Mirra 2 is another fantastic quality office chair from the people at Studio 7.5 and those at Herman Miller.

We have a number of Mirra 2 chairs in stock, click here for more information.